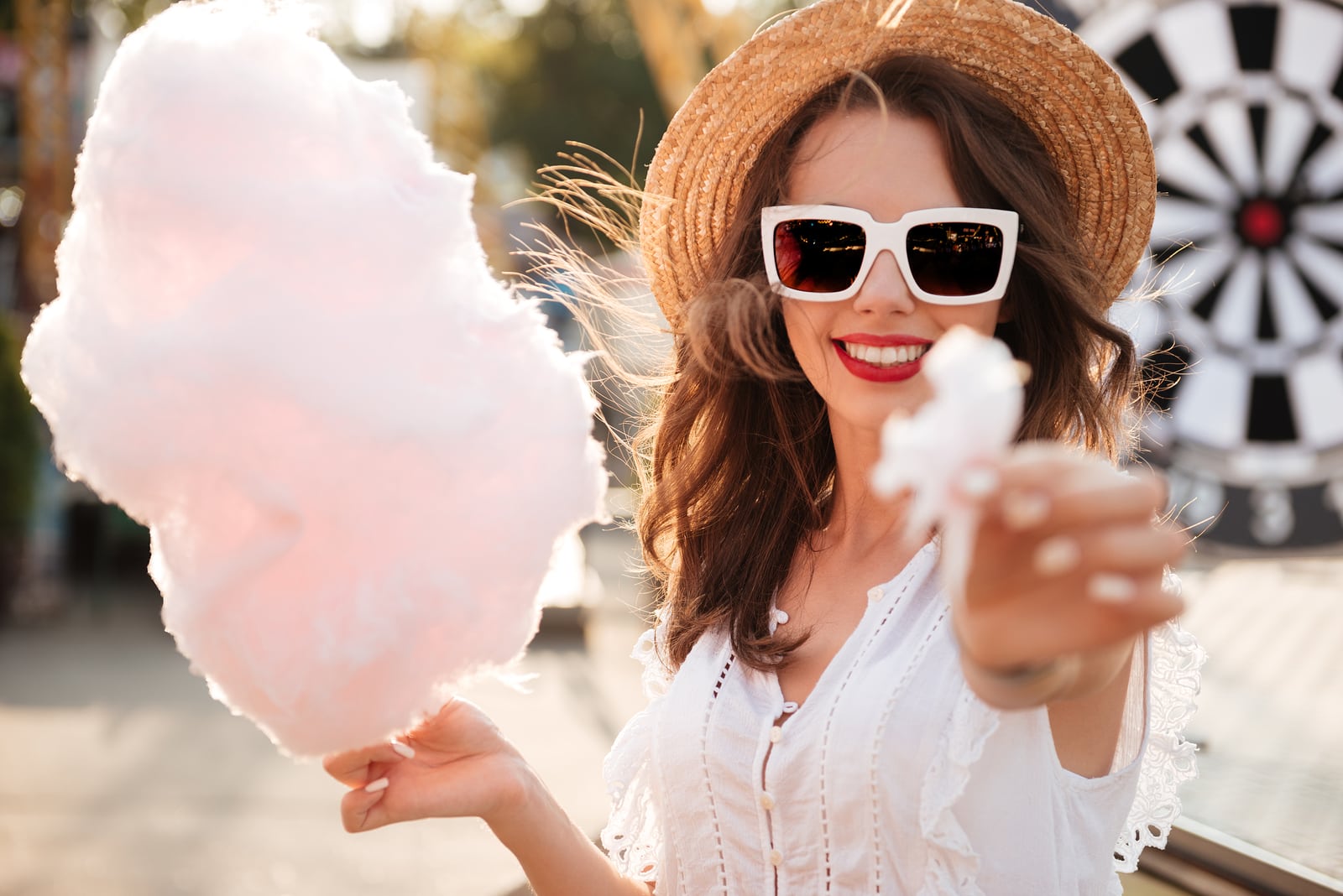 It’s almost officially summertime, which means it’s nearly the season for amusement parks, fun rides, and county fairgrounds. That means it’s also the time for some of our favorite concession stand foods such as snow cones, corn dogs, and of course cotton candy, to make an appearance. Of course it’s not a surprise that these foods aren’t the healthiest, but while it may be tempting to indulge in a few of the season’s best from time to time, many park patrons don’t always know the damage these sugary, salty treats can cause on your teeth’s health in the long run. Here are four of some of the worst theme park foods for your teeth.

Probably the fairground’s signature treat, this pure spun sugar may be delicious, but there isn’t any redeeming nutritional value found at all. Clocking in at just 100 calories per ounce, its main benefit is that it’s much smaller and lighter compared with similar sweets. While everyone has been warned that excessive sugar exposure can result in cavities and tooth decay, many don’t know that the sucrose found (and the resulting glycoproteins) can help plaque form and stick to your teeth, especially since munching cotton candy requires excess saliva. If your teeth are extra sensitive to sugary foods, then there’s a chance that the enamel can wear down easier and cause extra tooth pain.

Deep-fried foods are a staple at theme parks, and none are more ubiquitous than the powdered-sugar web known as the classic funnel cake. These deep-fried delights possess 760 calories and 44 grams of fat in just a single cake, the same amount of fat you should eat for an entire day! In addition with simultaneously raising blood pressure and cholesterol levels, the stickiness and saturated fats in fried foods such as these can increase risk for developing cavities as well as inflammation in the gums.

Pretzels are usually viewed as a healthier snack alternative when compared with starchier, saltier foods such as chips or fries. In this case, soft pretzels contain nearly 500 calories per serving and over 100 grams of carbohydrates (much more than needed for a healthy adult), with no added protein or fiber to balance them out. Most troubling for teeth is that soft pretzels contain a whopping 779 mgs of sodium; while they might not directly cause cavities, the excess sodium can weaken the internal tissues by increasing an unhealthy amount of calcium in the body, which can potentially lead to later risk for osteoporosis and tooth loss.

The devil’s advocate of carnival foods, candy/caramel apples are probably the healthiest option available in part to actually containing fruit. That doesn’t mean they don’t possess their share of problems for oral health; their sugary candy coating is an instant target for cavity-generating bacteria, as well as being a general sticky hassle for those with braces, fillings, retainers, and crowns. Despite this, these 300+ calorie treats (plus an extra 150 for toppings) are surprisingly high in fiber (averaging 4 grams), low in fats, contain necessary Vitamin C and antioxidants, and result in longer stomach satisfaction after eating.

It’s perfectly alright to indulge from time to time in some of these delicious foods during the summertime; they are regarded as seasonal staples for a reason. That being said, it’s important that you also remain conscious about the potential health risks that they can have for your teeth’s appearance and well being. Try not to make these or any sugary, carb-filled foods a major part of your daily diet, balance calorie intake with regular exercise, and substitute with healthier options when available.

Foods Most Likely to Get Stuck in Your Teeth
November 28, 2018